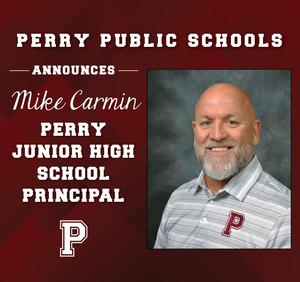 
Carmin joined Perry Public Schools in 2019 as the high school social studies teacher, assistant football coach and assistant wrestling coach. In 2020, he accepted the district athletic director position and will maintain this role while also serving as junior high principal.


Carmin has nearly 30 years of experience in education and athletics. Prior to his arrival in Perry, he was at Cushing High School for eight years and spent 10 years at Weatherford High School before that.


In his career as a football, wrestling and soccer coach, he has been named Oklahoma Small School Coach of the Year three times, selected to be the Oklahoma Coaches Association All-State team coach twice, and claimed Cushing’s all-time win leader as head coach for the soccer team. In all sports combined, he has racked up an impressive 30 state tournament appearances with 18 individual state champions in his coaching career.


Carmin earned his bachelor’s degree in history education from the University of Central Oklahoma and later obtained his Master of Education degree from Southwestern Oklahoma State University. His wife of 29 years, Misty, is a second grade teacher at Perry Elementary. They have three children; son, Peyton is 25 and their twin daughters, Kenzi and Kori are 21.


As junior high principal, he will oversee the 7th and 8th grade students and staff. Upon accepting this role, Carmin commented, “I look forward to the opportunity of being principal at Perry Junior High School and working with our outstanding teachers and staff. It is bittersweet because I enjoy coaching Perry’s talented young people, but very much look forward to working with them in a new capacity. I am honored that Dr. McCarty and the board of education have entrusted me with this position, and I can’t wait to get started!”